Shifting back to culinary delights, dear readers, it's time for you to once again vicariously enjoy my gourmet adventures. We returned to Feast Restaurant in Atlanta for a dinner featuring (mostly) the wines of Joseph Swan, a small family-owned winery in the Russian River Valley of Sonoma County. I say “mostly” because a couple of the offerings were from other nearby wineries, such as the reception wine, a Sonoma Vineyards Chardonnay. Having had this before, I found it consistent with my prior impressions - an unoaked chardonnay, with a little pineapple tartness to it, light, easy to drink, but a fairly short finish.

The first course was a salad of mesclun greens, diced golden beets, and goat cheese. Not just any goat cheese, mind you, but goat cheese in a fluffy ball, coated with (I'm guessing here) panko bread crumbs and ground nuts, and lightly fried. Thus began a theme for the evening, with its first incarnation being “How can you make cheese better? Fry it!” The wine was a Russian Hill Estates Chardonnay from the Gail Ann's Vineyard (named in honor of Warren Dutton's wife), 2005 if I'm not mistaken. At 14.7% ABV, I was surprised to not be overwhelmed by sweetness or oakiness. In fact, this wine had a beautifully restrained fruit flavor, with citrus and pears predominant.

The second course was an apple and cherry stuffed quail wrapped in pancetta with a brown butter sage sauce. Continuing the theme - “How do you make quail better? Wrap it in bacon!” One dining companion's comment was “OMG this is so good!” (OK, she didn't actually say “OMG” abbreviated, but you get the idea.) I agreed with that sentiment. The quail was perfectly prepared, the sauce was very rich, and the wine paired very well. Said wine was the first of our three Joseph Swan offerings, their 2007 Cuvée de Trois Pinot Noir (which, for those of you who care about ratings, earned a 93 point rating from Wine Spectator as well as their “Best Value Pinot Noir for 2009”). I should note that the name is currently outdated, as the winemaker Rod Berglund explained to us that he now uses four vineyard to source this wine rather than three, but they just didn't want the hassle of changing the name! This Pinot was a flavor assault up front (but in a good way!), with tastes of raspberries and cherries and hints of chocolate, minerality, and spice. This course was a perfect display of wine as food and of wine pairing with food.

Course #3 was pan seared ostrich with roasted root vegetables, caramelized onions, and a zinfandel sauce. The flavors were outstandingly rich and dense, as you can imagine. The only drawback was that the ostrich seemed a bit overcooked (as can happen easily with ostrich, and I suppose especially when one kitchen is trying to turn out 30+ covers simultaneously), and thus the texture was too chewy and tough. Despite this execution stumble, the pairing was solid – the wine was Joseph Swan's 2005 Zinfandel from the Mancini Ranch Vineyard. This Zinfandel had classic Zin characteristics of dark cherry and black pepper, but it was restrained and balanced, something that so few California Zinfandels achieve. 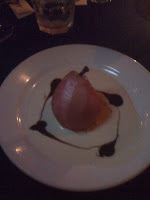 Dessert was a whole poached pear with a Pinot Noir crème anglaise. It was served at room temperature, although I might have preferred it warmer. Nevertheless, the fruit was great and the sauce was amazing – my picture probably doesn't do it justice, but the dark puddles in the creamy sauce were the Pinot Noir reduction, which had the consistency of caramel. Theme again - “How do you make Pinot Noir better? Make Pinot Noir candy out of it!” OK, so that's stretching the theme, mostly because it would be hard to improve upon the 2006 Pinot Noir from Saralee's Vineyard (again for you rating-heads, a 91 point WS offering). This Pinot was a very pretty and elegant wine, with a pale rose color yet bursting with flavors of red berries and a nice perfume. I noted some cherry and chocolate as well, and was surprised at how full the flavors were for such a lightly colored wine.

In closing, the late Joe Swan (yes, there was a real Joseph Swan) is quoted on the Winery's website as saying “There are few more civilized pleasures in life than good company, good food, and good wine.” These are words we can all live by.

Blogger's Note: In the interest of full disclosure, I have received a small amount of compensation from this restaurant for consulting work, but not for this or any other review.