Beer and grub at the Brick Store Pub

I had the pleasure of attending a beer dinner at the Brick Store Pub last week. This was a five-course affair with paired beers, with all the beers being from the Highland Brewing Company out of Asheville, NC. Highland’s owner, Oscar Wong, was in attendance to discuss his beers and generally hold court. The Executive Chef at the Brick Store Pub is Eric Ottensmeyer. (Notice also the cool keychain they handed out as a party favor!) 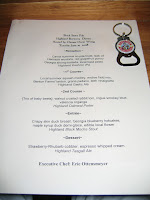 I begin this description/review with a big disclaimer: I really like the Brick Store. I have known one of the proprietors for some time now, and know several of the bartenders by name. Thus, I am favorably inclined toward the BSP (as it’s occasionally known) in general, and I consider it best to reveal my positive bias up front. Having said that, I expect that I will make a concerted effort to offer constructive criticism and critique where I can.

Overall, my dining companions and I had a great time at this beer dinner and we thought the beer-food pairings were spot on, despite a few critiques of some of the food preparations and executions. I am willing to chalk some of those critiques up to an imperfect kitchen arrangement and perhaps a kitchen crew that isn’t quite used to this level of food prep. With all those disclaimers and caveats in place, on to the dinner! And note the pictures for each course – hopefully they come through well enough for your viewing pleasure.

The reception course featured a carrot hummus on pita toast with leek oil, 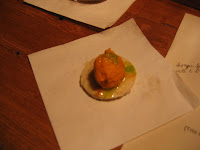 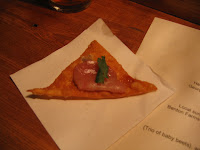 and a Georgia shrimp tostada with local basil pesto. 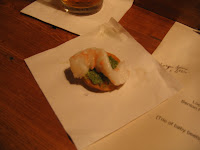 The carrot hummus was sweet and tangy, and the leek oil was subtle but provided a consistent backdrop. The hamachi slices were perched on perfectly crisp wonton triangles, and were sweet and citrusy from the ponzu (essentially a Japanese citrus vinegar). The shrimp on the tostada were cooked well, and although I wasn’t initially convinced about the pairing with the pesto it definitely grew on me. The beer for this course was the Highland Kashmir IPA, which was hoppy with a good bite but not lingeringly bitter. The beer paired particularly well with the sweet and tangy ponzu. 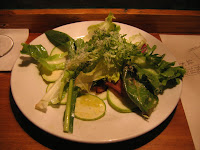 The greens were incredibly tasty, having a good bite and some potent bitterness. We all remarked on how different these tasted from the average “mixed greens” one finds in the grocery store – that is to say, they had a definitive flavor. The squash were tender and mildly sweet. My biggest issue with this course was the so-called “lardon”. In my book, lardons are pieces of thick-cut bacon that are diced, blanched to remove the excessive saltiness and smokiness, and then fried short of being well-crisped. The items in this salad were not lardons in the classical sense. They were more like strips of bacon, cooked crisp, and with a very potent smoky flavor. This is not to say they weren’t good (although one of my dining companions objected to the strong smoky flavor), but they definitely weren’t lardons. The beer was the Highland Gaelic Ale, a great all-around ale that complemented the dish without competing with it.

The second full course was a “trio” of baby beets served alongside a walnut crusted rabbit loin, with rogue smokey blue cheese and Valencia orange sauce/vinaigrette. 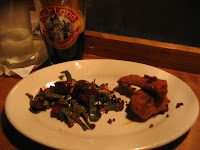 The “trio” was actually all three parts of the baby beets – leaves, beetroot, and finely diced stems. The salad was fabulous. The rabbit, at its best, was like really good meaty white fried chicken. My smaller piece was a bit dry and overcooked, but the larger piece was perfectly juicy. However, one of my companions’ rabbit was definitely overcooked. The beer was the Highland Oatmeal Porter, a dark and rich pint that was a little bit sweet and smoky – it went well with the dish, especially with the smokey blue cheese in the salad.

The entrée course a crispy skin duck breast served over Georgia blueberry hotcakes that were topped with a maple syrup duck demi-glace and some edible local flowers (which I couldn’t identify). 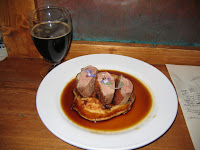 I was a bit skeptical of this dish upon reading its description, but the combination mostly worked for me. The demi-glace was savory and slightly but not too sweet, and while the duck meat was great I would have preferred a crispier skin. I think this was an execution matter; perhaps the kitchen rushed the prep of the duck rather than allowing it to render off its fat more thoroughly and thus yielding a crispier skin. The sweetness of the blueberries in the hotcake provided a nice contrast with the dish overall, especially since I had expected a very sweet “pancakes and maple syrup” flavor profile. The beer was the Highland Black Mocha Stout, which was thick with pronounced coffee and mocha flavors and some good bitterness – the bitterness of the sweet smoky beer went very well with the slightly sweet gamey duck.

Dessert was a strawberry-rhubarb cobbler, topped with espresso whipped cream. 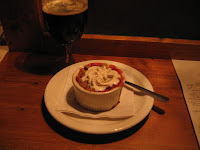 The cream was actually white cream dusted with flecks of espresso. The cobbler was quite yum and warm, and not too sweet (you don’t want strawberry-rhubarb to be very sweet, in my opinion). The beer was the Highland Tasgall Ale, described by Mr. Wong as a “wee heavy Scotch ale”, single hopped, malty, and slightly smoky. The tart, creamy beer was a perfect foil for the dessert, especially for the espresso cream.

Overall, I rate this dinner as a success, despite a few missteps in the execution of some of the food dishes. The food concepts were first rate, as were the beer pairings. The cost of the dinner with beer (the pours were a bit over half a pint each) was $55, which seemed very reasonable to me. I look forward to the chance to taste Chef Ottensmeyer’s dishes when he has complete control over a serious kitchen operation (which, rumor has it, might happen in the not too distant future, but that’s all I’m allowed to say…). In the meantime if you’re a fan of good food and great beer and you have the chance to partake of another BSP beer dinner, I’d recommend you do so.
Posted by Dan at 11:19 PM

This is my third try to get into this blog. I hope I am successful this time.

What a great description of the meal at BSP. But really, duck meat on pancakes - even a nonvegetarian would have to see that as a little over the top! It was a great vicarious journey through a meal which had so many ingredients I would not be able to eat. (Dietitians love to read about food!) And just think, I thought I was tuning in to read about annual conference!

Hi Dan
Thanks for the kudos on the dinner! I work with Oscar at Highland and was sorry to have missed it! Oscar said he really enjoyed himself and the company of everyone! The BSP guys..and gals do a great job! It's one of my favorite stops in Atlanta! Cheers!
Sandi

Dan - I thought you might want to know that Highland is coming out with a new Seasonal in about 10 days. This one is a certified organic called Black Mountain Bitter. Highland is only the 2nd NC brewery to achieve full organic certification.
You can get more info about it at
www.highlandbrewing.com/beernews.htm

Great news! Will the Black Mountain Bitter be distributed through your regular channels, i.e., if folks can find other Highland Beers they should also be able to get this one?