Checking in and priming the pump

I know, I’ve been away from this blog far too long, and now I’m returning merely for instrumental purposes. That’s right, dear readers, I’m going to use you. Here’s the story: I need to write a sermon today (it’s OK, I’ve been working on it in my head for some time), and one bit of writing advice I’ve often heard is that one should do a little bit of “warm-up” writing before embarking on a serious writing project. So, this is my warm-up work. Somewhat appropriate that, as I sit in my house looking out at the beginning of what could be a real snowfall (“real snowfall” being defined in Atlanta as more than an inch of accumulation that sticks around for 24 hours).

This entry will also be a bit of self-indulgence, reflecting on what was a really top-notch dining experience last month. My business partner and I (with our spouses) always go out for a “company holiday dinner” at some nice place around town (I won’t publicly disclose how we treat said expenditure for tax purposes). This year’s venue was Joel Restaurant, self-described as a “chic French bistro” run by Joel Antunes, the recipient of the 2005 James Beard Foundation Best Chef in the Southeast (a very prestigious award).

[Note to self: You’re using too many parenthetical asides. Write more directly.]

We went for the chef’s tasting/prix fixe menu, which is something I always like to do at good restaurants. That way, the chef gets to show off his or her talents and freshest ingredients, plus it has the additional advantage of relieving me from thinking about what to order, what wines to pair with what food (if wines are offered as part of the pairings), etc. [Note #2: There was both a parenthetical aside and an “etc.” instead of simply closing out the sentence with something firm and direct. Must do better.]

On to the menu. The first course featured Goldpoint oysters (although my Google search for these turned up empty – perhaps it’s just another marketing name for some other variety) with a cauliflower tapenade and cucumber sorbet. This was an outstanding opener; the oysters were plump and juicy, the tapenade was surprisingly tasty, and the sorbet was perfectly refreshing. The paired wine was Iron Horse Brut, a solid sparkling wine from California.

The second course was Hawaiian shrimp with shitake ravioli in a ginger sauce. Upon hearing this described, I was a bit skeptical – I mean, what’s so special about shrimp from Hawaii? After tasting them, I was persuaded; they were very sweet and meaty, and perfectly cooked. It’s very easy to overcook or, even worse, undercook shrimp, and I appreciated the chef’s execution here. The shitake ravioli was yummy, and the ginger sauce was a fine way to tie the two together. This course’s wine was a Torrontes from Crios, the principal dry white varietal from Argentina. It’s floral and a little spicy, and went very well with the Asian-influenced dish.

Now we get to the real treats for my readers, as the next three courses have pictures to go along with my languid descriptions (we didn’t think to take a picture of the first dish, and the picture of the second one didn’t turn out very well so I’m not bothering to post it). This course was a Jerusalem artichoke “lasagna”, a free-form style with some slices of pasta filled with the artichoke puree. It was served with a chicken jus and an obscene amount of black truffle slices. The aroma from the truffle slices in the warm jus was insanely good, and the Jerusalem artichoke was as much as anything a great backdrop for the other flavors. By the way, the Jerusalem artichoke, also known as the “sunchoke”, is neither an artichoke nor related to Jerusalem. Just thought you’d want to know. The wine was a chardonnay by Rombauer, an excellent chardonnay from Carneros, and although it was a California chard with 100% barrel fermentation, was not too buttery or oaky, qualities I tend to abhor in many over-oaked California chards. 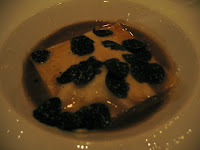 The fourth and pretty much “main” course is complicated to describe. It’s essentially pheasant two ways; one was a roast pheasant breast, and the other was a pheasant leg confit. The breast came with a black olive tapenade, and the dish also included polenta and quince. There was a pheasant cider jus, and more shaved black truffles. It sounds like an overly complicated dish, but in practice it was well balanced, and since the portions were modest nothing was too overwhelming. I couldn’t recall having pheasant before, but it was outstanding and I hope to do so again. Most of us preferred the leg confit because of its savory richness. The wine for this course was a reserve merlot from Navarro Correars, another Argentine offering. This, unfortunately, was probably the weakest of the wine selections, although it still wasn’t bad, and its richness did pair well with the dish. 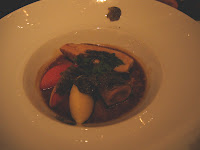 And now the final, dessert course, a hazelnut biscuit, topped by layers of chocolate wafers and chocolate mousse, and a scoop of caramel ice cream. This was an excellent closer, and was paired with a fine Australian Muscat from Yalumba. You’ll note my PDA in my hands in the background of this picture, as I realized that taking notes was the only was I would possibly remember all of the details about this meal. All in all this was an excellent meal, approaching some of the best I’ve had the pleasure of enjoying at a restaurant. That statement leads me to reflect on what I might consider the “best” meals I’ve ever enjoyed, and surprisingly enough, many of those were enjoyed not at restaurants but around a table in my own or someone else’s home. Which is to say, I suppose, that there is more to a fabulous dinner than sublime cuisine.

Anyway, I hope you enjoyed this little self-indulgence. If I ever finish this sermon, I’ll post it next and you can read something more spiritually inclined.
Posted by Dan at 12:04 PM

Will the sermon be about.. food?