Power going to my head

In a truly Colbert Bump moment, I stand in awe of the influence of my previous post about Greg Ryan (et al.), formerly coach of the U.S. Women's Soccer Team. I say formerly because apparently someone on the U.S. Soccer executive committee saw my post and responded appropriately, as Ryan is now out as the coach. No word yet on the successor, but they haven't yet called me to ask my advice.

I wonder if this trend could work for other things. For example, if I said that President Bush was living in the past and relying on old methods to fight new foes, would he be replaced in a week? Hopefully not, given who his replacement would be... 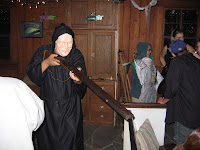